Twelve years ago the Jazz Connection Big Band was founded by Simon Wheeldon when he was just getting into the groove as a music teacher for the Hamilton Wentworth District School Board. Back then it was a reading band where local horn players could meet to keep their chops fresh, enjoy an occasional solo and camaraderie. Frank (Sonny) Musico was there at the start too.

The band rehearsed in Dave Thierry’s music room at Ryerson Middle School. They had no plans for gigs or anything else beyond just meeting to play some jazz. My recollection from the one time I subbed in was that there were quite a few rough edges, lots of spirit and lots of joking around as if everyone was trying to blow off steam from their day’s work.

The joking around hasn’t left, and the music has steadily improved. The performance at the Pearl Company on November 16th celebrated the release of a full length album of jazz after 3 years of preparation.

Frank Musico and Simon Wheeldon, the two founders, are like Ying and Yang. Depending on your mood, you can read the straight shirt (red) remarks of Musico, or the easy going (blue) remarks of Wheeldon.

1. What is the overall purpose of the JCBB?

Says Musico, “We started over 12 years ago as a rehearsal band with the hopes of getting hired and playing concerts in the GTA and greater Hamilton area. We have performed at The Rex in Toronto twice, Hamilton City Hall, Hamilton waterfront park, Queenston Heights Park, Waterloo Downtown Jazz Festival, and several concerts over the past two and a half years at The Pearl Company in Hamilton.” 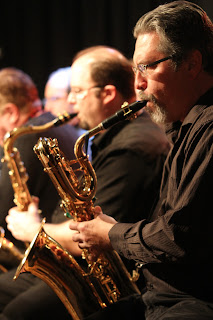 Says Wheeldon, “I wanted to start the band because I knew there were a lot of great jazz musicians in and around Hamilton that need a regular place to play with other great musicians.”

2. Over the years, has the band sought paying gigs at all? Has it succeeded in getting paid gigs, or is it more of a not for profit effort?

Says Musico, “We have performed many free concerts. We were hired to play in the Hess Village Jazz Festival 3 years in a row.”

3. What would you say is the main reason players are in the JCBB?

Says Musico, “The musicians do so because the band plays at a high calibre and there are always musical challenges in the repertoire. The band also has strong leadership under the musical direction of our guitarist Paul Taylor.”

Says Wheeldon, “The terrible humour during practice  – People can’t get enough of it.”

4. When and where did the idea of recording a CD come in? Was there any personal outlay from band members required, or were other funds raised?

Says Musico, “Once the band reached a level where we were playing professional level charts and the band was developing a desired level of competence and a quality sound, we felt it was necessary to produce a CD in order to get the band more widely heard and for promotional reasons.”

Says Wheeldon, “Lots of people at our gigs asked if we had CDs for purchase – I got tired of telling them no!”

5. Can you tell me a story or two about the recording process?

Says Musico, “Having played many concert at The Pearl Company and working closely with Gary Santucci, we felt that the best place to record was at The Pearl Company. Jay Burr was our recording engineer and Simon Wheeldon our producer. We recorded in May 2012 and the CD was ready by November.

Says Wheeldon, “Jay Burr or ‘Tuba Jay’ of Plughead Productions was a huge part of the success of this project – His expertise and knowledge were invaluable in trying to capture the sound of The Jazz Connection.” “Paul Taylor relieved some of the pressure from the band with his usual humour and banter with the audience.  By Friday I think most of the band had forgotten we were recording because the usual banter between tunes resumed – to the point we had to “shush” some of them so as not get the bad jokes on the CD!”

6. What are one or two highlights of the band’s performance history? 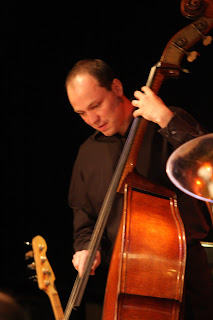 Says Wheeldon, “The Highlight for me was when Pianist John Sherwood joined us for a gig at The Pearl, having a player of that calibre really drove the band to a new level.  I also consider the fact that we’ve had two Canadian Music Legends sit in with a feather in the cap.  Paul Hoffert of Lighthouse and drummer Graham Lear have both sat in with the band. Friday’s CD release gig was huge for me because so many people cam out to support us!”

7. Does the band have a vocalist?

Says Musico, “What is important is that the vocalist has to be able to sing with a big band.”

Says Wheeldon, “We have been talking with vocalist Juliette Dunn about a gig in the near future.”

8. What is the next step for the JCBB?

Says Wheeldon, “We have hopes of getting some invitations to a few jazz festivals next summer as well as performing a few more concerts at The Pearl Company.”

9. Where and when does the band practice? Are new members welcome? What is the process for a new member to join?

Says Musico, “The band rehearses at a school on Hamilton Mountain on Wednesday evenings. With the release of our CD we will be promoting the band more in the hopes of being hired to perform our big band jazz. concert at The Pearl Company on Friday December 14th. Mike Malone on trumpet and flugelhorn and Adrean Farrugia on piano.”

Says Wheeldon, “Frank makes it sound so formal – we bug people until they come and play with us – I believe we bugged you for some of the first rehearsals 14 years ago.”