Written for small groups of instruments, chamber music is often referred to as the “music of friends” due to its intimate nature. Shiori Kobayashi, an accomplished Dundas-based clarinetist, recently launched an innovative chamber music concert series, featuring a variety of Hamilton area guest performers, to bring the warmth of chamber music to audiences in the Greater Hamilton Area (GHA).

“I wanted to support area musicians while introducing little-known pieces that highlight unusual combinations of instruments. I aim to encourage local audiences to listen to music they may never have heard before,” she says.

“There are hundreds of pieces that have not had enough time on the concert stage. My goal is to offer these beautiful blends of sound to Hamilton audiences, to empower local musicians to perform this unique music, and to ensure that the tradition of chamber music performance remains alive and well. At this time, there are no other small ensembles in the Hamilton-Burlington area focusing on this.”

As an active soloist and chamber musician, Shiori has performed with various community orchestras and ensembles, including the The Sinfonia (Redeemer University College orchestra), the Dundas Concert Band, and Symphony on the Bay. She also has coached and conducted clarinet and woodwind clinics at Hillfield Strathallan College, Hill Park Secondary School, and Redeemer University College, among others. Shiori currently performs with the Grenadilla Winds trio, Symphony on the Bay, the Cambridge Symphony Orchestra and Masterworks of Oakville. She teaches woodwind instruments and piano privately and at various music academies in the GHA.

Moving to Canada from Japan as a child, Shiori experienced a language barrier and culture shock. “At the time, aside from my family and Japanese friends, music was the only thing that helped me overcome my frustrations,” she said. “Music gave me confidence and strength.

“More than half of my days were spent listening to many different styles of music. Although I may not have understood the meaning of the songs, I tried to listen to the harmonies, the dynamics, and phrasing of the melody line, which can be understood no matter what language you speak. I strongly believe that music is a universal language.

“Music comforted me, especially in difficult times,” Shiori says. “It made a huge impact on who I am today. I hope to touch people’s lives through performance, the same way music helped me.”

Shiori invited Ian Green, a talented pianist from Hamilton’s east end, to help bring her chamber music brainchild to life. Ian has been using his skills to advance music education for some 15 years now. In addition to teaching music theory and piano musicianship to students of all ages in his home studio, Ian co-founded a start-up technology company that creates music education resources for mobile devices.

Ian wears many hats in the music industry, such as: Music Director and Organist at Ryerson United Church in Ancaster; co-owner of the music entertainment company Southern Ontario Music; piano adjudicator at a variety of Ontario music festivals; and recording secretary for the Hamilton-Halton Branch of the Ontario Registered Music Teachers’ Association. He performs regularly and enjoys playing music that challenges his audience as well as himself.

“I select music both to entertain and to educate,” he explains.

“There is a need on a grassroots level to keep classical music alive in the community. That’s why I was so excited by the idea of organizing and playing chamber music with musicians from in and around Hamilton.

“In March, Shiori and I performed with guest musicians Homer Seywerd on oboe and flute and Seiichi Ariga on flute. In May, we will be joined by Zoltan Kalman on clarinet and Abigail Freeman, an operatic coloratura soprano, in a concert featuring compositions by Antonín Dvořák, Feliz Mendelssohn, Francis Poulenc, and Vincenzo Bellini. It promises to be an inspiring evening, which we hope will pique people’s curiosity about chamber music.” 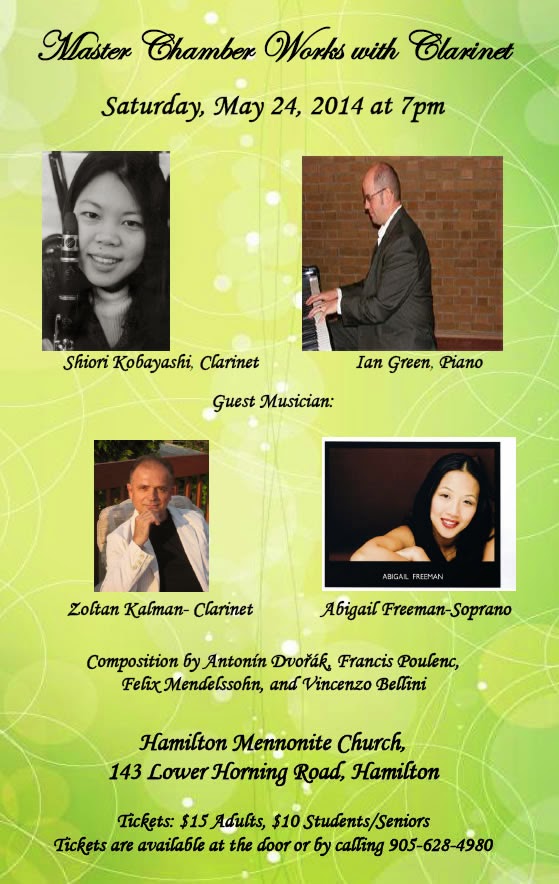