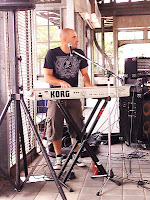 As your curiosity increases, you approach the house-shaped station enclosure, and you imagine it is as “the house of Lo-Fi.” You see a band of five young men confidently practicing their musical craft, happy in fact as they enjoy the unusually bright setting of a downtown sunny afternoon, sucking back extra large Timmies instead of the usual party slosh. Clean-cut, nice boys, you think. On closer look you see a few tattoos, some cool shades, a bandaged knee, an angled black cap. And you hear energy!
Like a peeping tom circling a house, you circle the Station, peering in from all sides to catch the best view while you listen to the catchy, upbeat music with flavours of reggae, rap, funk, house and even new country mixed in. 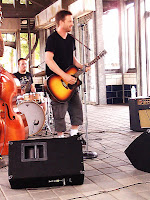 In Lo-Fi’s musical house each room represents a musical style, and is furnished with riffs  catchy enough to get your attention, set your toes tapping, get your body pulsing and fuel your party. Sitting at the kitchen table are Vince Sciara (keyboards), Ken Corke (upright bass), Todd Knight (guitar, vocals), Josh Harrison (drums), and the artist known as LIPS (lead guitar). Go back a week and they are having a lively discussion about how in hell they are going to tone down this public lunchtime concert so that people won’t be choking over any raunchy T&A college party lyrics.
Solution? Delete the expletives and replace with … silence. Tone down the guitars, use acoustic bass. 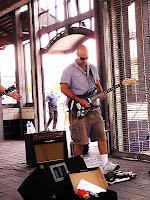 The result is a light-hearted and fun show, but unlikely a true version of what Lo-Fi usually sounds like. Corke usually plays electric bass but today he was using his upright.  Wise choice. It created a rounder and fuller sound, which, when combined with Lips’ imaginative countermelodies and Sciara’s keyboard pads, made the difference. Solidly written songs such as Jack and Jill, Summertime, The Wiggle Roomevoked familiar boy/girl situations without trying to be too serious.
Corke’s other band, Sumo Cyco, is releasing a new video “Loose Cannon” right about now. IMHO, his bass work is a big part of Lo-Fi’s groove intensity. Knight’s vocals, always solid, were helped by his friendly stage presence and unquestioned front-man attitude. LIPS and Sciara had lots of great backup vocals, textures and ideas and “Milk” Harrison, the only member with formal music training (Mohawk  College ’06), laid down a solid groove throughout.
Lo-Fi is an experienced band with a well-defined sound. Accustomed to small and medium stages, and boisterous, expectant audiences, they have figured out how to put on a good show. Formed in 2006 and having three CDs under their belt, they are looking at recording a fourth very soon, with some extra production help. Judging by the variety and the quality of today’s show, it will be worth a listen.
Next gig is Joe Dog’s in Burlington, this Saturday July 28th. 10 PM start.
Contact: http://myspace.com/lofimusic