[JULY 14, 2012] Evening pedestrians on King Street East were pleasantly surprised on three separate occasions in May, June and July. Room For Two, a vocal and guitar musical team made up of Brenda Brown and Joe Finochio, was performing outdoors on the sidewalk in front of three newly opened businesses on King Street East. The duo was filling the streetscape with its catchy and enjoyable selection of music. 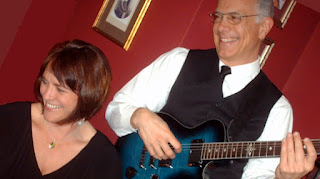 Room For Two and other local musicians are helping to accomplish one of the major objectives of the International Village BIA, which is to transform King Street East between Mary Street and Wellington into a vital and rich commercial area, flavoured by ethnic variety, and characterized by good food, great shopping and an inviting vibe.

Susan Brathwaite, executive director of the International Village BIA, set up Music In The Village to bring music to the neighbourhood. She wanted to involve busking musicians and that is where Room For Two took part.

Brathwaite set up a series of lunchtime concerts on Wednesdays and Fridays at the Ferguson Station. “My vision from the start when I took up this position a couple of years ago was to implement music. I felt it was a big piece of the puzzle. We’ve got so many local artists, and they don’t all just want to play in the local bar or pub scene … I would love to have music here all the time. I’d like to see music engulfing the area … When there’s music going on it calms the area, slows things down and people stop to look around.”

Auditions were scheduled in May, and representatives from other BIAs joined Brathwaite to listen.
Room For Two answered Brathwaite’s call for busking musicians and for the lunchtime series. They auditioned successfully and soon had their first assignment. As a new musical duo, Brenda and Joe were willing to hone their performance skills in the unpredictable setting of musical busking. This opportunity would help them meet new people and become adaptable.

Busking is a noble craft. Surprise, spontaneity and connection with the audience make it the most excellent way of bringing a streetscape to life. Although buskers are usually sanctioned by the area businesses, they are almost never paid by them. They rely completely on the gratitude and response of their impromptu audience. Busking rewards people who venture out into their neighbourhood and into their community. Naturally, the audience shares its enjoyment by offering payment to the buskers, freely and out of gratitude.

On their first night out busking as Room For Two, Brenda and Joe performed in front of J. H. Gordon Books, next to The Appleberry Cafe. It is located on the south side of King a few steps east of Denninger’s. Pedestrian traffic was steady as people came to enjoy the store’s grand opening. J. H. Gordon’s new owners, who moved into the area and purchased the building where their business is located, were glad to welcome many new customers and share their excellent selection of new and used books.

In June, Room For Two worked in the front entrance of Zoran Designs, across from Denninger’s. They had to move inside due to inclement weather. The enthusiastic proprietor, Maja, was thrilled about having their music on site to welcome new and returning customers. Zoran Designs, a well-established custom jeweller, has moved from Westdale into its new location on King Street East.

In July, Room For Two staked out the spot in front of Modify Your Closet, a great new clothing store located on the north side opposite Forbidden City. Brenda shares, “This one gentleman stopped and listened for several minutes, completely captured by our music. When we finished he said, ‘That was beautiful. I just have to thank you for making King Street a beautiful place!'”

Brown continues, “We love to play old standards from popular shows, and commonly known folk and pop repertoire. People always recognize and appreciate the music we’re sharing. Our choice of songs is very important for those reasons. On our best night we saw two hundred people walk by.”

Not everyone gets what’s going on. The puzzled looks on some peoples’ faces seems to say, “Why are you here? Are you doing this for money?”

Brenda and Joe don’t look like beggars, which brings the issue to light: there is a stigma that they’re working to overcome. Often, pedestrians see a homeless or displaced person doing music to attract attention or to encourage people to be charitable. Without the sanction of the local businesses, such performers are usually considered (although not always!) a nuisance. So when people see “legit” musicians on the street, their attitude changes.

This is musicians at work with a purpose. Auditioning and placement of musicians on the sidewalk is an act of faith and vision, spearheaded by Brathwaite. It is also happening at the James Street North Art Crawl as well as the Hamilton Farmer’s Market. While not for everyone, for Brenda and Joe of Room For Two, it’s been a very positive experience which allows them to make a small contribution to the downtown’s revitalization.

Special events after regular closing time have been slow to catch on. Partly because of the reluctance of many shop owners to stay open, and partly because of a negative stigma that has built up about this area over the past years.

On the other hand, the lunchtime concerts at Ferguson Station have proven to be very popular. Says Brathwaite, “The International Village has become a go-to area for the lunchtime crowd, due to the great variety of food outlets. We see people coming to sit at the Station during their lunch hour to listen to the music. And some of our musicians who have a following, are actually drawing people to the area, which we think is great.”

Room For Two will be doing a lunchtime concert on Friday August 10, 2012 at Ferguson Station.

The fresh vision and attitude is visible and gaining ground, as represented by the words of Maja at Zoran Designs, “Some of my customers from Westdale were open to the idea of us making the move downtown. They remember what it used to be like down here, and they feel that it is right for businesses to be courageous and move into the area. And many others have been pleasantly surprised by their shopping experience when they come down here. Parking is no problem, and I know they will be coming back and bringing others.”

In order for the evening streetscape on King Street East to come fully alive, good music will undoubtedly be necessary. But some other things are needed too, some provided by new business initiatives and some provided by the City of Hamilton. Pedestrians and evening shoppers will look for good window shopping, extended store hours, open restaurants and pubs, outdoor cafes, and open storefront seating. Traffic will need to be “calmed” and localized to remove the noisy thoroughfare situation of the present.

Business owners can access various City-funded programs to help them upgrade their properties. According to Hazel Milsome of the Economic Development Division’s Urban Renewal Section, over the past ten years, “when you take into consideration the other programs that we offer in this area (Hamilton Downtown Multi-Residential Property Investment Program and the Hamilton Downtown Property Improvement Grant Program) we have funded approximately $3.5 million in grants and loans.” She anticipates an uptake in applications as the programs are promoted and as the economic outlook improves.

The traffic issue is on the agenda for Susan Brathwaite in the near future. It has become a consistent theme in the discussions relating to business health along King Street and Main Street.

For the time being, we are getting a taste of what the future should be like on King Street East. Tasteful and engaging music will become the norm. Jazz, folk, world and roots music will waft from unique and imaginative venues, with lots of great food and atmosphere. It won’t be long before many restaurants along King Street East are eager to pay good money to good musicians to help make the vibe happen.

You can be sure that Hamilton has got the musicians available, ready and waiting to step into those opportunities.

Don’t you think it’s time to take a stroll in the International Village?

Brenda Brown has listening samples and contact information at brendabrownmusic.com