Home Artists-Musicians PHILOSOFEAR: Powered Up, Proven, and Primed to Perform

Last night’s much-anticipated Hamilton double bill by Philosofear and 40 Sons was a major session of prog rock/contemporary rock power infusion. Not only did it gain some new support and credibility for 40 Sons, but the show at Rebecca Street’s Citadel Theatre dispelled all doubts about whether Philosofear will be poised to lead the prog rock genre out of Hamilton to a wider audience in the future.

40 Sons is Mike Repic on vocals, Mike Spic guitar and vocals, Link Andrews on bass and Cristiano Andreatta on drums. Back in 2007 this band won Local Group of the Year at the Hamilton Music Awards. They’ve been crafting their own unique mix of original “modern rock music” since 2004. Front man Repic has a unique stage presence. His dreads seem to give him a special charisma-power, but then you realize that it’s not the hair, it’s the voice. Flexible, wide-ranging, and clear. A great rock voice. And the other guys in the band are completely committed to writing and performing with authenticity. Spic’s guitar and backup vocals are a key element in the band’s sound signature. Andreatta’s drumming can only be described as rock-solid and perfectly suited to this music. Andrews’ strong bass playing kept everything together nicely, but it was his infectious joy on stage that was most entertaining. The band refuses to be pigeon-holed or watered down in any way. Their performance tonight was right on.

Philosofear is Alan Packham on vocals, Kelly Kereliuk on guitar, Justin Faragher on bass and vocals, and Mike Harshaw on drums.

As the band took the stage there was a palpable sense of excitement and anticipation in the room. The Philosofear set was fast, loud, and exciting from start to finish. Within minutes, several of the audience were moving and pumping the air to the music. The closeness and soft-seat vibe of the Citadel Theatre gave the sound team lots of control, and the mix and volume was perfect for the room. The lack of open space in front of the stage kept the headbangers at a distance, confined to their seats. Not that it mattered. The show was a proving ground, a test-run, a stake in the sand performed for an audience of 150 faithful musician friends, family, and longtime supporters of the band.

Packham brings the mood and overall personality of the music to the stage. Essentially, it is his stage movement, facial expression and vocal delivery that provides the focal point for the performance and sets a dark, brooding tone. During performance he embodies the idea of the “speaking conscience.” His delivery is raw, powerful, and thoroughly entertaining as he sneaks around the stage, backing off during instrumental features, then prowling up to the front to deliver the next lyrical commentary on the doom and gloom mankind has created. 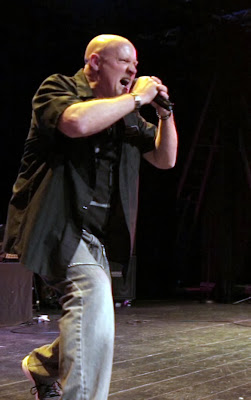 His vocal timbre changes moment by moment to give suitable inflection to the words. The accompanying music underscores the lyrics in triplicate to emphasize the weight of the words, but stays thrilling and complex enough to allow your body to be overtaken by the beat, without the lyrical content getting you down.

In every tune tonight, at just the right moment as if discovering an easter egg in the middle of an awesome video game, the music switched into a transition/alternate section with a show of new rhythms, new riffs, and additional energy. Faragher, Kereliuk and Harshaw would take off and fire off a round of musical deliverance. Tight. Loud. Complicated. And then, Kereliuk would start wailing away on a guitar solo, a serene look on his face, an occasional flick of light brown hair off his shoulders, while a barrage of notes thrillingly massaged the collective psyche of the audience. 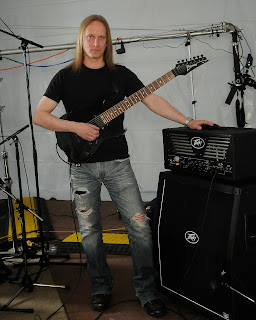 His calm, constant eye contact with Faragher kept the music on track. A knowing smile at the finish affirmed the perfect execution once again. Kereliuk embodies the contradiction. Outwardly calm in stance and demeanor, his hands are moving almost too fast to discern.

Faragher (Juice) is in the same league as Kereliuk. Touque-topped and calmly pacing the stage, he doesn’t let out much in terms of visual showmanship. But that’s okay. With Faragher, the understated stage presence belies the reality that he is 100% engaged and extremely skilled; the music was indisputable proof. Precise. Fast. Complicated. 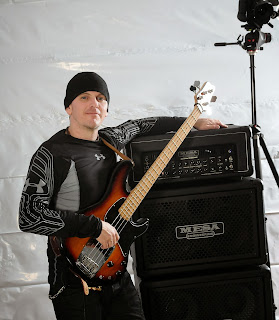 To me, that’s the intrigue of this genre. It is a show of contradictory ideas that are meant to collide in the air during the show, for the entertainment and pure distraction of it all. A list of juxtapositions: Musical excitement vs. lyrical weight. Complex musical rhythms and melodies vs. a slow vocal growl. A search for wisdom and enlightenment vs. thoughts of chaos, death and destruction.

How did this all happen to be? Over the past several months Philosofear has been steadily hammering together a renewed and equally high-energy version of their former selves thanks in large part to the world-class drums work of newest member Mike Harshaw. Former drummer Brian Doerner’s shoes were hard to fill, and Harshaw is definitely up to the task!

It’s not insignificant that a month ago Harshaw was nailing down the beat for long-standing (since 1984) Ottawa-based, international thrash metal act Annihilator, playing to audiences numbering in the tens of thousands. That band’s founder and international guitar player legend Jeff Waters certainly found a treasure when he brought Harshaw on board. 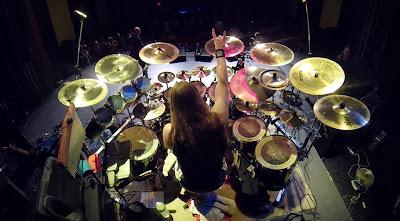 To see the live video of “Soon For You” including Harsahw’s drum solo, click here.

Harshaw’s five minute drum solo dispelled all doubt that he has mastered the chops on both feet and hands. I enjoyed the insertion of melodic timbres such as temple blocks and tuned bell cymbals, and was suitably impressed by the finely executed drags and ruffs between both feet and seamlessly integrated with the toms. Kudos to the sound crew for giving Harshaw the perfect level of clarity and volume for the room. Getting really picky here, all I would wish for is that the two floor toms would have matched levels with the mounted toms. Fills from high to low seemed to fade away at the very time when they needed to end big. Probably just a microphone thing. And that’s my only quibble. I predict that Harshaw will continue to become one of the dominant percussive artists in the area in this genre in the months and years ahead.

The three Philosofear instrumentalists Harshaw, Faragher, and Kereliuk have become a triumvirate of underpinning musical authority for the band. With Packham they have created a unique sound, and now they can carry this band forward to accomplish whatever they desire.

With the show behind them, and with its resounding success confirmed, Philosofear can now move on with confidence to their next venue. I don’t see why these guys won’t be opening for any number of big name international acts that come through Canada. There’s also no reason why they can’t hook up with an international tour.

This may just be the first chapter of an exciting story where, once again, the world discovers just how much musical talent can be exported from the Hammer.