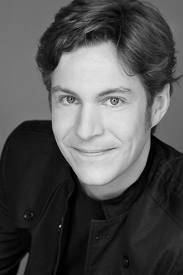 Maxime Goulet is the Composer-in-Residence this year for the National Academy Orchestra at the Brott Music Festival. He graduated from Cegep (Junior College) Marie-Victorin in Montréal where he studied Jazz Guitar and holds Bachelors and Masters Composition degrees from Université de Montréal where he studied with Alan Belkin. He writes concert music for orchestra and scores for video games such as the Dungeon Hunter series and the Amazing Spider-Man.

I met with him at Mohawk College where he was attending rehearsals in the McIntyre Theatre.

GHM: How did you meet Boris Brott? What music have you written for the NAO?

MG: FIve years ago I was commissioned by the Vancouver Symphony to do a short piece inspired by the Olympics (Citius, Altius, Fortius). Geneviève Leclair (Boris’s assistant conductor) heard it. They were looking for a short Canadian piece and she suggested it to Boris. He was doing a Young People’s concert with an Olympic theme with the National Arts Centre Orchestra in Ottawa and he decided to play it there as well. The next year Geneviève was here again and she decided to play my Puppet Parade, commissioned for her orchestra in Montréal. Boris heard it, looked at the score and even conducted one of the sections. He suggested we do a project for his McGill Chamber Orchestra and commissioned What a Day for them. The next summer he played it here. Last year he invited me as Composer-in Residence: I would write music and also organize a project involving five different composers. My 2012 piece was Symphonic Chocolates, four short pieces inspired by chocolate flavours: caramel, very lyrical, mint, very fresh, dark chocolate, very passionate, and the last in espresso tempo with a Brazilian rhythm. Each audience member had a box of four chocolates which they could eat as each movement was played. It went very well so Boris did it again with the McGill Chamber Orchestra.

GHM: Your music doesn’t sound like avant garde academic music. How do you feel about that music?

MG: I find it interesting, but don’t feel emotionally involved and it doesn’t stick in my head. But I’m happy that this kind of music is being done because it opens the boundaries and I get some ideas for textures or orchestration which I apply in a different field. It’s like Cirque du Soleil being inspired by new things that are coming up in contemporary dance but putting it in a form more accessible to the broader audience.

GHM: You style is clearly more adaptable to music for media: film, video games and so forth.

MG: When you write music for film or video games you have to be able to write themes with an emotionally based palette. For example, if something in a scene is threatening I try to express that in the music. I keep a traditional classical music approach and add the new textures and colours to it.

GHM: Were you a gamer before writing music for games?

MG: Not at all. I played video games when very young but didn’t keep it up. My sister is an animator working for a video game company. She encouraged me to look for opportunities to work for the numerous companies in Montréal. I wanted to write music professionally and make a living out of it.

GHM: In video game scores, how much is acoustic instruments and how much is sampled or synthesized?

MG: All the video game music is samples, 100% samples. Except electric guitar, which is real.

GHM: You studied Jazz guitar. Do you play the guitar parts?

MG: No, I still have the technique but I haven’t kept up with the new sounds. I want the sound to be edgy and current, so a colleague plays them. I’m currently working on a new video game which will have some real orchestra on it. We were recording the Chocolate piece in Prague for a CD to be sold with a chocolate box. We had some free time with the orchestra after we were done, so I recorded some video game music.

GHM: What software do you use?

MG: When I worked for a video game company I had Sonar because they’re on PCs, and at home I was working on Logic because I’m on Mac. It was confusing. So I got Cubase as a sequencer that works for both platforms. When I write for orchestra I write directly on Finale because I don’t bother doing a mock-up. I know how it’s going to sound. At one time, I also used Digital Performer.

GHM: Where do the sounds come from?

MG: I have many libraries and I pick perhaps 10% of the sounds from each. You have to know the sounds. I write a lot of orchestral music so I know what to choose. I like the legato violin sounds from the Vienna Symphonic Library but I like the staccato sounds from the LA Scoring Strings Library. For string harmony, I will take the East West Library. Sometimes I change up pretty quickly, with two or three sounds in one part in a single bar. I have a personal orchestral template and I update it when I get something new.

GHM: This has been fascinating. Thank you very much.

David S. Fawcett is an Associate Composer of the Canadian Music Centre. He had a professional career as a classical singer. He later taught music in the schools including 13 seasons as conductor and chorus master of the HWDSB’s Buchanan Park Opera Club. He blogs at davidsfawcett.blogspot.com.