Watch the CBC video clip of the event

John Crawford, heading up the Hamilton Blues Society, was standing around chatting. A big, happy man wearing a shiny blue team jacket, he looked just like dozens of other locals who could be seen relaxing with a coffee and conversation. At 2:30 sharp, Crawford picked up a guitar and started into a rousing rendition of The Thrill Is Gone (made popular by BB King).

Heads continued to turn as the soulful response of MizA Smith echoed throughout the area.

Guitars began to appear. A guy with a cardboard box whipped out some brushes. A young woman pulled out sticks and chunked out the back beat on a cafeteria tray. One distinguished-looking gentleman produced a harmonica, another man in a long gray woolen coat did the same.

Within two minutes about ten musicians had appeared, and an equal number of photographers. The tune seamlessly switched to Mojo Working, bringing the tempo and excitement up a notch. By now a group of about fifty onlookers had gathered. Lots of people stood and smiled. A few smartphones came out to record the event.

Few words were exchanged between the participants; the music did the talking. Gestures and looks between musicians kept things on track, and everyone seemed to know when it was their turn to take a little solo. 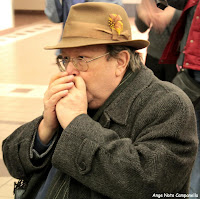 Nobody flinched when the young security guard approached the group. The group behind the event, the Hamilton Blues Society, is on a rebuilding journey to gather new and old blues and roots players together to cultivate and perpetuate the rich heritage of blues music in Hamilton. Despite the fact that permission for the gathering had been granted by mall management, the security team did their due diligence and made sure the group’s mojo didn’t get working overtime!

The Hamilton Blues Society invites all lovers of local blues music and musicians to come to the informal “Blues Jam” at the Cannon 205 Gallery next Sunday, January 27th, from 2 to 5 p.m. Five dollars or more gets you in to enjoy some great blues and feel the energy of what is the Blues in Hamilton today! Bring your instrument, or just bring yourself to give a listen and have a beer.