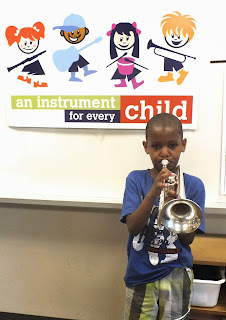 If you were at Supercrawl in September and heard what sounded like an out-of-control orchestra tuning up, odds are you were passing by the “Instrument Petting Zoo.” The sounds you heard were budding young musicians sampling a range of orchestral instruments. The booth was there to get the word out about An Instrument For Every Child (AIFEC), a local charitable organization that is all about giving children the opportunity to experience the joy of learning a musical instrument.

The AIFEC program starts with children in grade one being introduced to a variety of instruments through hands-on demonstrations by volunteers from Hamilton’s musical community. Then, in grade two, the kids get lessons on the instrument of their choice with qualified teachers. Soon they can play basic melodies. Small ensembles start in grade three. The program ends at grade four, at which time it is hoped a program can be established with the Hamilton Philharmonic Orchestra to mentor promising musicians. All of this is provided free of charge by the program and instruments are made available for the students to take home to practice on.

Program founder Astrid Hepner says, “An Instrument For Every Child is not just another music project. It is a social project at heart, and we are excited that AIFEC is becoming a reality in Hamilton. AIFEC doesn’t set out to produce world-class musicians. Rather, it hopes to create community spirit by giving children the opportunity to develop teamwork and interpersonal relationship skills through music.”

The idea came to Hepner after the Jazz in the Hubs outreach program where the Mohawk College Jazz Band played at dozens of local schools, sponsored by the Hamilton Music Collective. Children were excited by the hands-on component of the program where they got to try the instruments. “We soon realized that we had to do something more than just show the children musical instruments once a year and then leave,” Hepner says.

She turned to her native Germany, where there was a program that provided instruments and music lessons to elementary schools. “We used that program as a template,” she said.

Then, through a fortunate set of circumstances Hepner was put in touch with Paul Lloyd, who had remembered the value he obtained as an inner city kid by being able to play in a band. It was Paul’s donation of $150,000 that launched the AIFEC program. Since then other sponsors have come aboard, including ArcelorMittal, the Hamilton Community Foundation, the Trillium Fund and the Turkstra Family Foundation. Currently the program is operating in six schools: Cathy Wever, Hess Street, Holy Name of Jesus, Dr. Davey, Memorial and Prince of Wales. The goal is to be in 10 schools by 2015.

Astrid Hepner’s career has taken some fascinating turns. Born and educated in Germany, she studied Musicology at the University of Cologne and earned her degree in Performing Arts from the Folkwang School in Essen. An accomplished saxophonist, she moved to New York City in 1995 with her husband Darcy Hepner, a Hamilton native. She worked in the music business as a performer and band leader, and in marketing for EMI Records and The Blue Note Group. Both Hepners are currently instructors within Mohawk College’s music program.

If the Instrument Petting Zoo comes to a location near you, stop in and introduce yourself. Think of the value of AIFEC. The anticipation of children joyfully playing a musical instrument makes it worth spending time amongst the bleating of the saxophone, the mooing of the trombone, the growling of the bass and the beating of the drums!