When artist Dave Kuruc considered possible themes for his proposed entry into the City’s Gore Park Art Beacon Project, he didn’t have to look far for inspiration. The City of Hamilton’s rich history of live music gave him plenty of memories and ideas to draw upon:

What was the history of music in Hamilton? Who else should I hear? My love for the city started at a young age and local music was just one more aspect to learn about. Places like The Golden Rail and The Grange Tavern loomed large here. Ronnie Hawkins and his Hawks (who would go on to become The Band) were spoken about as legends. Teenage Head, The Dik Van Dykes and Forgotten Rebels were as punk as anything coming out of England or the States. MuchMusic would show the country that Junkhouse and the Killjoys could rock with the best of them. McMaster radio station CFMU transmitted local sounds to radios across the city.

Hess Village was still known as place you could catch live music. My own peers could be found on the stages of La Luna, Transit Union Hall, Dante’s Lounge, The Underground and Raven. Before there was a Supercrawl, Sonic Unyon and its roster of local bands were waving the flag of independent music in Hamilton. That spirit inspired me to start a band, release CDs and put on concerts.

When I wasn’t going to see bands I was flipping through the stacks of used CDs at Dr. Disc and Cheapies. Searching for that elusive album on my list or discovering something new was one of my favourite things to do. I would pore over album artwork, read lyrics and see who was behind the music blasting through my speakers.

Music shaped my life and helped me to connect to my city in ways I never could’ve imagined. Hamilton has always been The Music City to me.

The art beacons were conceived as part of the Gore Park Master Plan. The content would be guided by two themes:

History and Heritage -Recognize and reflect the rich and unique history of the area.

Inclusiveness and Community – The work should express a sense of community, be accessible to people of all ages, recognize the pedestrian focus of the area and encourage gathering.

The first of the installations will be completed in late spring 2017.

Kuruc’s winning art installation, entitled “Music City Markers” is illustrated in the sketches below. The art beacons will be illuminated at night and provide a touchstone to Hamilton’s culture. [Read Kuruc’s full proposal here.] 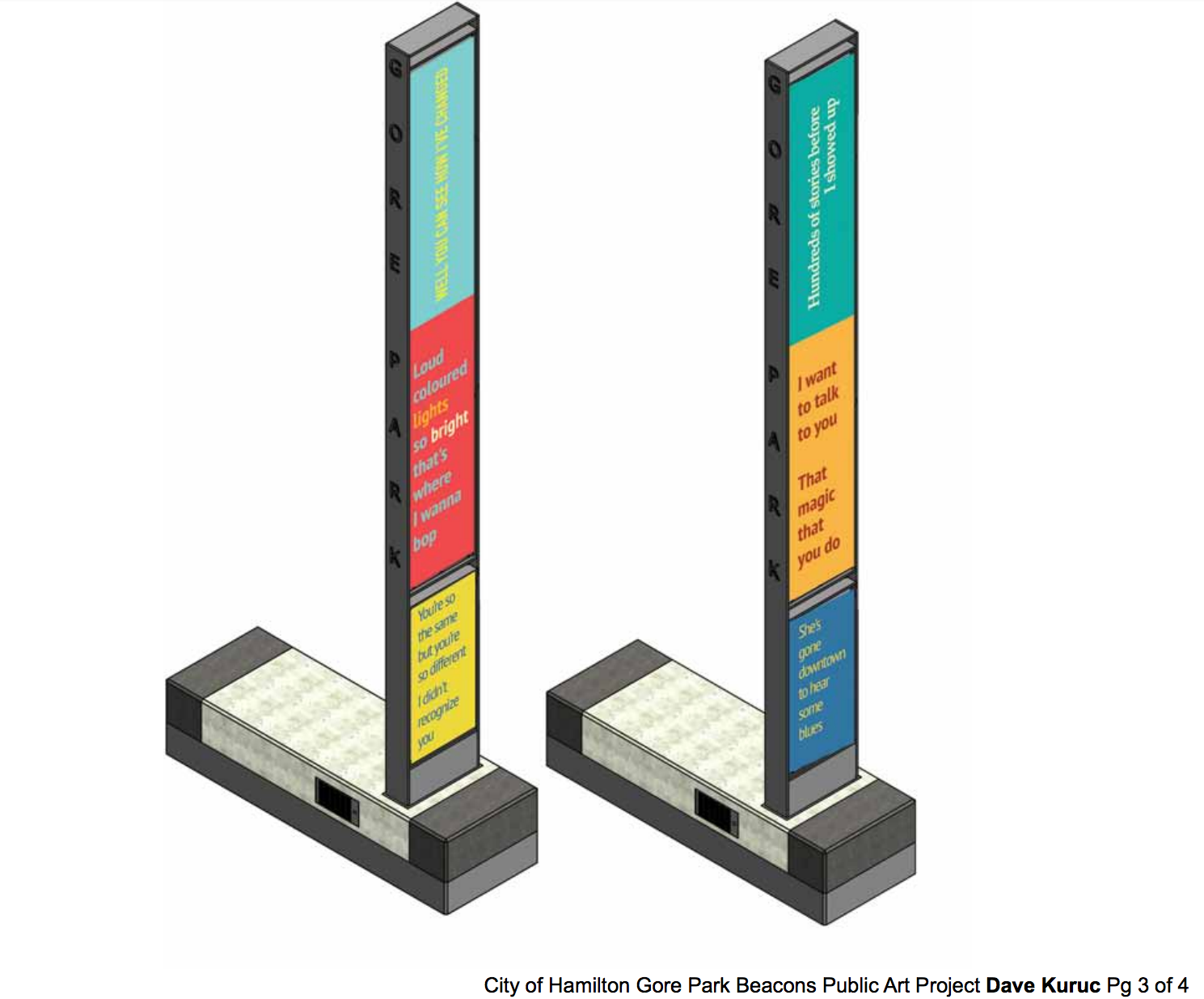 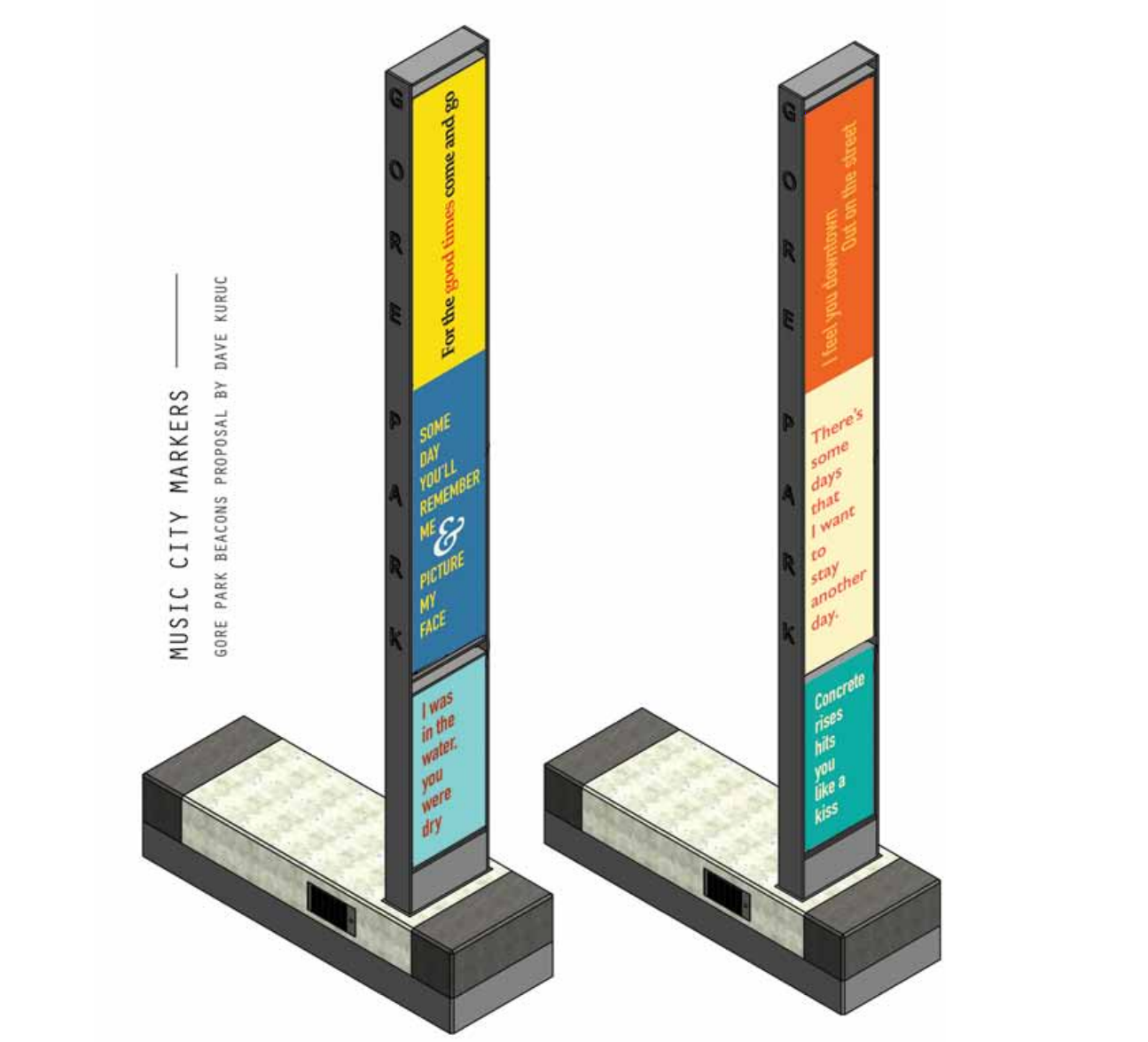 Music City Markers is a beautiful example of how the arts interact seamlessly in so many ways. The Gore Park Art Beacons not only draw upon music, poetry, and visual art elements, but as you can imagine, elements of the structural design of the beacons, and how the beacons are perceived and function within the Gore Park context will also have a big impact on the overall effectiveness of the installation.

Interesting that the artist Dave Kuruc finds such powerful and happy memories in the social context of these song lyrics. The words remind him of the songs, which remind him of the artists and the venues they played at, which in turn reminds him of the particular time in his life and how it left an impression on him.

For the casual observer who looks at the beacons and considers the lyrics, it may be a challenge to make the connection and find meaning, especially if they are unfamiliar with the artists or the songs being quoted.

I hope that there will be some explanatory words posted with the art.