Matapa is a local arts promotion organization with a high calling. It aims to broaden our exposure and participation in a wider variety of international musical styles and traditions. The main strategy is to create an extremely high quality world music series.

According to Matapa Board member Dan Medakovic, “There is no other organization in Hamilton that is looking beyond the white musical culture.”

“Hamilton is a market that is grossly underserved by world music. With something like 55 languages being spoken in Hamilton, we are a prime market. Our Director Filimone Mabjala is extremely committed to all Matapa performances being of topmost quality. That’s the thing I like about Matapa. We’re creating an opportunity for these great musicians to come and perform here.”

Medakovic continues, “There are some sub-mandates. We support and respect the musicians as well. All the technical support must be excellent, the management, communication and compensation is fair.”

“So who is our audience? First, there are the local musicians who are open to broadening their horizons and exploring different styles, timbres, time signatures, and techniques. We try to create a collaboration with local bands to back up the visiting headliners. Last year Trinity’s backing band had Joel Banks as the bass player. The keyboard player was Bruce Tournay. They hadn’t played that kind of music before. The musical director was a Hamiltonian who is an African guitar player. He was making sure they all knew their parts. We had some rehearsals at my studio for a few weeks and then they put on this awesome show.”

“We had Sheri Maracle, a Six Nations aboriginal artist. She played and then Trinity Mpho played and at the end they got up on stage together and they jammed out some stuff. You could it was a totally uncomfortable; the band fell into a bluesy style riff and Trinity was improvising African a capella stuff over top of this blues. Some concerts will have an intentional musical improvisation at the end, which forces these artists to come out of their musical comfort zones.”

The Matapa opportunities for collaboration will bring the musicians themselves together, and have an enduring, enriching effect on the artist.

Says Medakovic, “My personal contribution is to help create some recordings of these collaborative, international efforts. One idea is to take the singer-songwriter crowd that I’m connected with, and have them work with international musicians. They could tear down the music and rebuild it.”

“Matapa also has a long-term goal of setting up musician exchanges. For a Hamilton artist to be identified and to have the opportunity to have a trip to, say, Botswana, paid for would be so exciting.”

“Filimone, from Mozambique, has a huge amount of experience in that country as a concert promoter and has great connections with big international acts. Now that we have our concert series in place, the most immediate goal is to increase local audience sizes. The task of getting the word around and putting people into seats is the priority now.”

Medakovic continues, “For example, last year we had Anna Moura, one of the top selling Fado artists. She played at Mohawk College for about 300 people. Here’s an artist who had just sold out three sold out shows in Portugal to 25,000 people, and we can only get 300. She’s recorded with the Rolling Stones. These are world class people who in their own countries are huge. They’re passing through so we happen to snag them for a Matapa event. All of those shows should be sold out, but I find a pretty severe lack of education and awareness around world music in Hamilton, so people don’t know what they’re missing.”

A second part of the Matapa mandate is education. “Often, when a concert is at night, during the day the artist will be offering a workshop. Families can come with their kids and they can learn to do African drumming or whatever. One thing we would like to see in addition is things like cooking and cultural classes as part of the daytime component,” continues Medakovic. 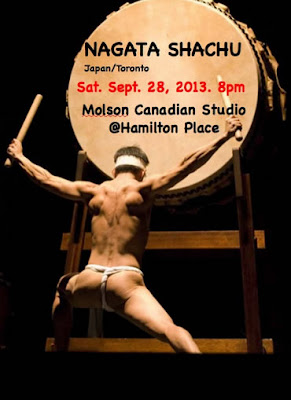 A third part of Matapa’s plans is a mid-summer festival. “Our festival next July will be a weekend at the Waterfront park. We’re calling it something like the Matapa World Music and Food Festival.”

Take some time to read about the visiting artists Matapa has lined up. Check out some of last year’s photos on the Matapa Blog. It’s going to be a great year of growth.

With music of all the world’s cultures now so easily accessible, we might take its presence for granted, and ignore what the cultural origins may be. We need to remain sensitive to the authenticity of various musical roots, and Matapa is committed to helping us do that.

Somewhere along the line, everyone has benefited from the richness of the music of many cultures, since it has influenced the music they are listening to. They just don’t realize it.

The first concert in the Matapa World Music and Arts Series is on Saturday, September 28, 2013 at the Molson Canadian Studio.