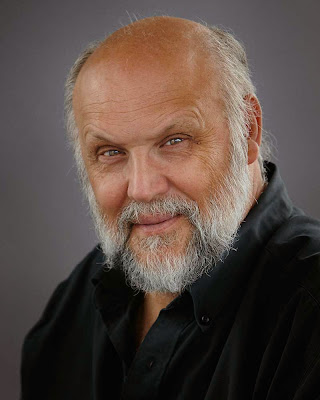 He is teaching in the Musical Theatre Department of Sheridan College and privately in Hamilton. He has been a voice professor at Mount Royal University in Calgary and at Memorial University in St. John’s Nfld. He has a career performing in concerts, opera, musicals, television, film and theatre. As recently as early October he did a full day workshop for the National Associate of Teachers of Singing and Carleton University in Ottawa. He also has a recurring role in the TV series Hell on Wheels on AMC.

DF: So you’re new to this community. How did you come to live in Hamilton?

RS: It was mostly luck, really. I had the job at Sheridan and we needed a place to live and somebody suggested Hamilton. My daughter, who lives in Toronto, looked for us and found a place. I just said I wanted to to live within walking distance from the GO station. And it’s worked out really well. We love living here.

DF: Where did you grow up?

RS: I was born in Preston, now Cambridge, and lived there as a child. Later, after high school, I worked in the family business, a service centre on the 401. I had done some singing and acting but didn’t start to study singing until I was in my mid-twenties.

DF: What sort of professional performing have you done?

RS: I really got my start singing in the Canadian Opera Company Chorus and the next summer in the chorus of Pirates of Penzance at the Stratford Festival. The following two years I did The Mikado at Stratford which was followed by tours of that show around Canada and in Britain. I’ve since done concert singing, opera, musical theatre (Drayton Festival Theatre and Huron County Playhouse) and some straight theatre, television and film as well. I was also the Education Coordinator for Theatre and Company in Kitchener.

DF: You’ve got a pretty impressive academic background. Where, and with whom, did you study?

RS: I did my undergraduate at Laurier, studying with Victor Martens. I studied Musical Theatre in San Diego. My Masters was at Western with Alvin Reimer. I did the Doctorate at UBC. At first I studied with Ted Baerg, but I went to teach at Memorial and when I came back to Vancouver to finish up the DMA I worked with Gary Relyea. I also studied with David Smuckler (Voice Coordinator at York University.)

DF: What made you decide to teach singing?

RS: I had been working with Christina James, the department head at Sheridan, and she had the opportunity to do a Christmas show and would be absent for the rehearsals and run of the show. She asked if I could teach, if I could take her students while she was doing this gig. I said, I hadn’t, but I thought I could. She gave me advice, really started me on the path of learning to teach singing.

Teaching isn’t so different from performing. In each you are sharing yourself. In teaching you share what you have learned, you essentially pass on your knowledge of what works. You have to be ready to take different approaches since each student is different. I once had a student who told me, years later, that I had made singing fun for him again.

Later, when I was doing my Doctoral studies, I did a lot of reading and analysis of books on vocal pedagogy so there’s that too.

DF: Did your early studies with Victor Martens have much effect on your teaching?

DF: With all of your varied performing experience, would you be comfortable working with performers in different genres, classical singing, musical theatre, even actors?

RS: Yes, all of them to different degrees, of course. I’ve taught acting, so that’s a given. I use singing in teaching voice to actors. I think it’s always about telling a story, whether it’s a song or an aria or a speech. You have to help the student understand the vehicle to the point where they can tell the story to the audience. That’s where I start.

DF: This has been fascinating. Thanks for your time.