Home Music Business What Is Consumer White Space and Why Is It Critical To Your...

What is Consumer White Space?

Consumer white space is the vast domain of uncharted territory that is now being viewed as an opportunity for creative people and businesses to serve people in new ways, as the digital age is transformed by cheaper, universal wireless connectivity. Think of it as a sort of new Wild West where heroic figures carry smartphones not guns.

He sat there with his chin cradled in his fingers, looking off into space.

He was pondering the reality of the situation shown in these graphs from the KPCB venture capital firm: 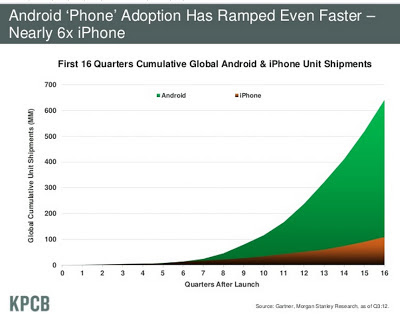 The huge green swath shows the increase in Android smartphone sales over the past three years.

Notice the steep rise in sales. 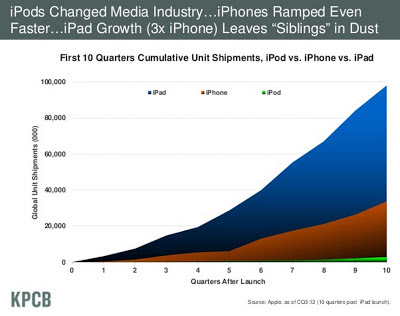 The blue swath represents iPad sales in comparison to iPhones and Androids.

Notice the steep rise in sales. 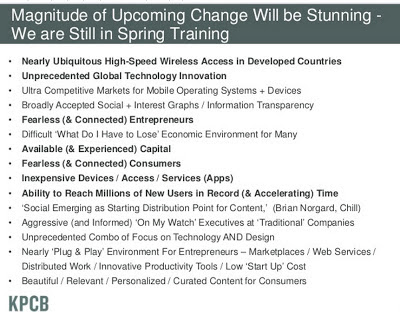 Handheld computing, Cloud storage, an On-demand, Real-time information affecting every type of daily activity. People getting more and more of it, and they like it!
If you’re thinking about how things were done two years ago, you’re already behind. The real question is: Where are things heading? 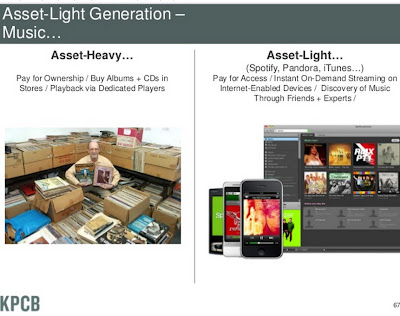 Think of handheld devices as a potential ACCESS key to engage with everything and everyone you care about. That is the way people are thinking nowadays. Why store it when you can stream it?
Not only that, when they sit down to watch TV, there’s a high probability that they have a handheld device with them, and that they’re using it. They would interact with that program if there was a Twitter feed or other app available. 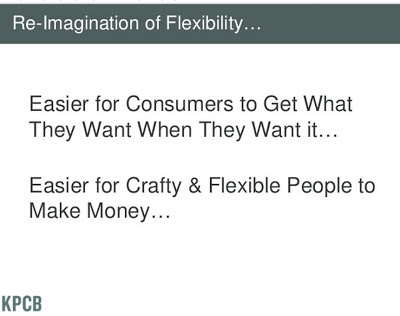 Think of this key question: How can you BEST deliver your music to your fans HOW, WHERE, and WHEN they want it? How can you put yourself in the place where the action is? What service do you need to help you do that? Who will help you do it? 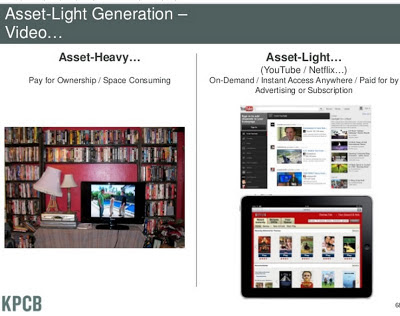 Streaming, on-demand video programming is quickly following in the footsteps of streaming music services. Why store it when you can stream it? 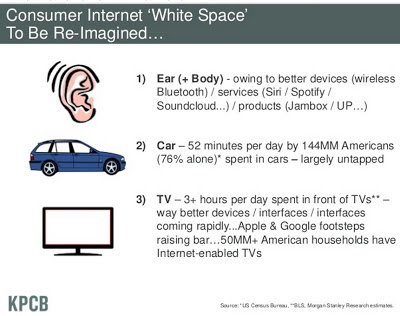 White space is a fancy term for the uncharted territory of consumer behviour associated with newly available attention time. Because of mobile technology and the fact that we are now able to get wireless connections anywhere (practically), everything is being re-imagined.
Imagine all the new places and times your music could be made available. Think of the new ways your fans could interact with you and your music, not only with stored music, or streamed music, but during one of your shows.

Have you heard about the “second screen”?

The use of second screen provides a parallel path, whereby the user can become an active agent in the broadcast content or in just some other activity, rather than interrupt playback.

Second screen content is synchronized with the streamed/broadcast content. Read about Microsoft’s Smartglass to get an idea of what this is all about.

Who is going to help you format, present and push your music into those hot new markets?

To add your name to the Hamilton Music Stream roll-out discussion list, go to http://hamiltonmusicstream.com or use the form below: