Always an avid concert goer, I have attended many more presentations since I retired from my day job. The scarcity of patrons at many concerts is disturbing. The demographics of the audience at some others is alarming. I attended a sold out recital recently at which almost all of the audience was substantially older than me. Many of those people aren’t going to be attending any concerts in just a few years.

So, what to do? In a story in The Spec Jeff Mahoney details how the Incite Foundation is giving away all the seats in the second balcony of The Great Hall at Hamilton Place for Hamilton Philharmonic concerts. This will allow people who wouldn’t otherwise to hear our wonderful professional orchestra and grow the HPO’s audience.

In a world of failing government support for even major arts organizations younger players have to make their own opportunities. The movement to cross-over and include music from different genres started a long time ago. Groups like Quartetto Gelato seem to have made a very successful career of it. It’s a tempting path for musicians who must create their own gigs.

Then there’s been a spate of on-line responses to Baldur Brönniman’s ten point reaction to a Jonny Greenwood interview about audience deportment at classical music concerts. It seems they believe younger concert-goers are being frightened off, not by the music, but by, among other things, not being certain of how to behave. Most of Brönniman’s suggestions didn’t impress me much as you can read here.

It was with all of this in mind that I sat down to talk to the members of Vox Metropolis, a Hamilton-based trio about their three concert series which begins on Fri. Nov. 14 at 8 P.M. at the Church St. John the Evangelist at 320 Charlton Ave. (at Locke). In the first, they will play original music accompanying three silent films, two oldies, Sherlock Jr. and A Trip to the Moon, and 2010’s The Sandpit.

I heard them play in the spring and they’re an accomplished and versatile group. Pianist/violinist David Jones is a fine classical pianist but also plays jazz and has composed film scores. Cellist/guitarist Kirk Starkey is, in addition to being an adept musician and composer, a sound engineer who has produced recordings including a prize winning CD. Flautist/saxophonist Sara Traficante won the City of Hamilton Award for an Emerging Artist in Music in 2012.

In recent years quite a few musicians, like the Cinematic Orchestra, have been writing new music for old films. I asked Vox Metropolis where the idea for this concert came from. David Jones pointed out that they have each done similar things before but the “interesting thing about this program is that the three films are very different,” each from the other.

I wondered how they managed to compose the music collaboratively. Starkey said that it was something of a work in progress but in this case the music is primarily from David Jones’ hand. Jones conceded that they were still developing their method and told me that the biggest challenges had been technical ones. “The films that I’ve played for before were accompanied in a general way (i.e. not synchronized tightly to the action). It wasn’t “to picture” which is what we are trying to do here.” he said. “There so much action going on, pratfalls and the stuff he (i.e. Buster Keaton) does and we wanted to have the music connect to all that. The technical aspect of pulling that all together, to make that click track work, was a huge challenge.”

They’ll each wear headphones and have a separate audio feed from the one the audience hears.

I pointed out that movie music has been characterized as “the music no one listens to”. I asked if they considered that in putting together the music for this performance. “I don’t see it that way.” Jones said, “I think if people don’t notice the music going by I’m probably doing my job.” Starkey said that it reminded him of string arranging for pop music. “When you’re coming out of the texture too much it’s an issue when it seems to take away from the song. I’m always trying to find that middle ground of doing something compositionally interesting while at the same time serving the song. It’s like walking a line.” 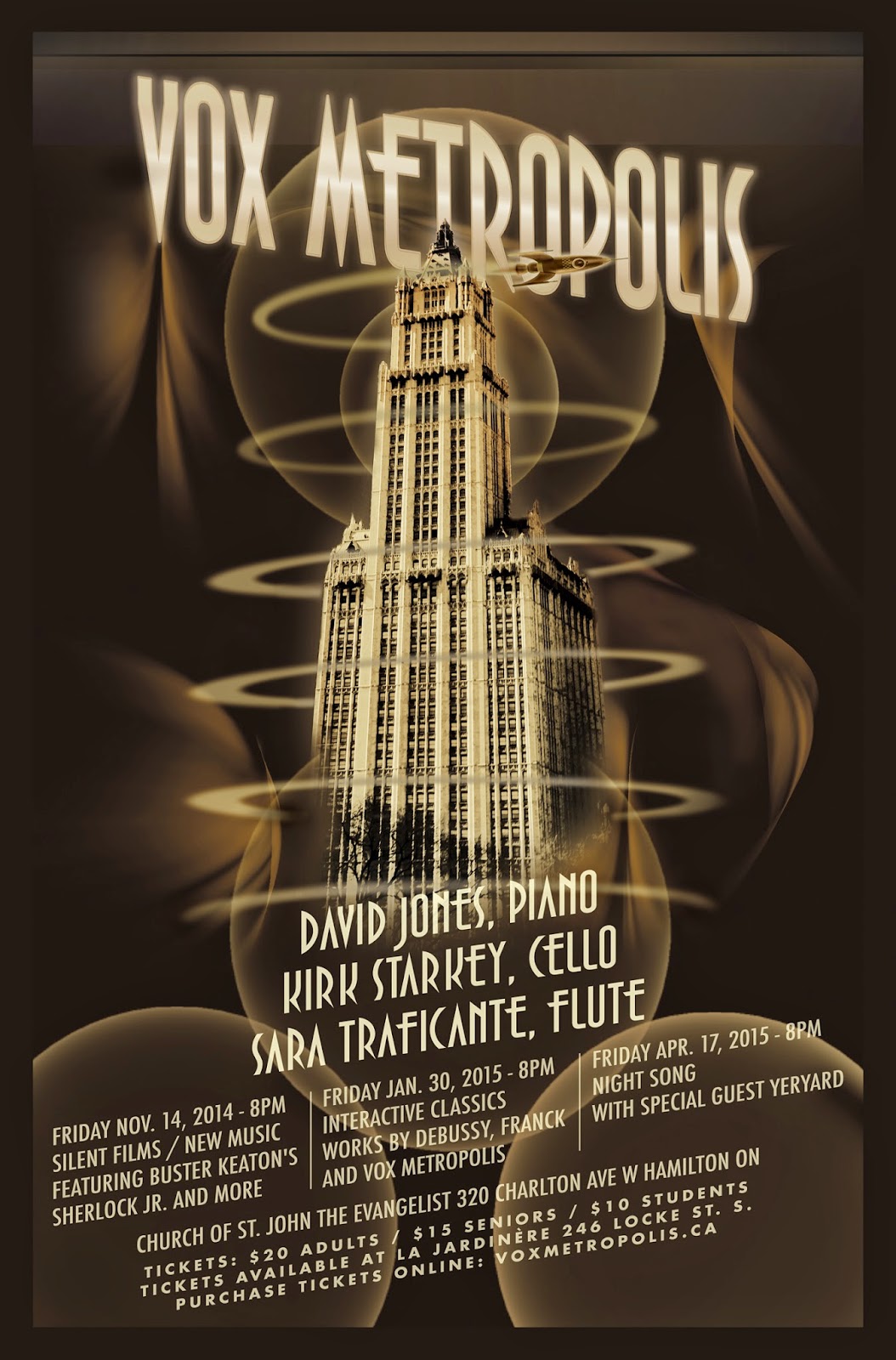 From David Jones: “The great thing about his group is that we’re willing to do anything. In a way are allowing the fates to take the course for us. What we want to avoid is being the group that has big lightning bolts on our costumes. We don’t want to be the rebel classical music group.”

Kirk Starkey: “We all do crossover type projects. There’s a proliferation of this sort of activity even with metal bands. We’re looking for a way of developing our voices in new avenues. We’re all big fans of popular song. Working as a fully functional back-up band, as doublers working with pop artists and doing legitimate crossover projects where we’re not working from charts, where every player functions like a member of a rock band, co-creating the music.”

Sara Traficante: “The other part of it is that we still want to be able to play those Mendelssohn programs. In the three concert series we are presenting in Hamilton we’re trying to explore three avenues. The first is the movie concert, the next is more classical, we’re playing Debussy, Franck but we’ll also have some twists in the program to bring the audience in in a fresh kind of way. The third is a collaborative concert with a pop vocal duo from Hamilton who are on the cusp of big things.”

What has been said to keep some people away from classical concerts is what Jones described as “the intimidation factor”. The trio mentioned that having performers speak directly to the audience can help. Personally, I usually wish that they’d just sit down and play. If there’s something interesting to be said about the performance or the pieces it’s likely in the program anyway. Jones has a different view: “I’m torn about the concert program and its function. I have issues with the idea of coming to a concert and reading about the group before you hear them play. Prejudging them and the music you’re going to hear. You’re putting it through a lens that may or may not be accurate.”

Starkey added, “I think talking to the audience is more about engaging them on a human, personal level rather that just imparting information, a laundry list of the group’s accomplishments.”

Sara finished the thought, “Speaking to people is connecting with the audience and making it comfortable for them, rather than it being a ‘teaching moment’.”

I finally asked why people should choose to come out and hear Vox Metropolis play.

Sara responded: “Our projects are quite varied, and what we want is to do everything to a very high level. With the three of us working in a collaborative way, creating the projects, the programs, this is a hugely gratifying endeavour. We’re not just signing up for another gig. And we have some tricks up our sleeves for the interactive classics.”

I don’t know what those tricks are and they weren’t saying but that alone should make it worthwhile coming out to hear these adaptable and accomplished performers accompany Buster Keaton’s pratfalls.