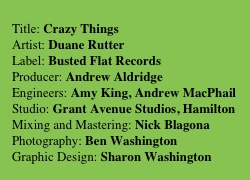 DUANE RUTTER BEGAN ANEW, THE CONVICTION AND CLARITY OF A SURVIVOR, GENTLE AND INCLUSIVE, SINGING TRUE LIFE FOOTNOTES THAT WE ALL REMEMBER.

A well-meaning friend said it after hearing that Duane Rutter had plans to record a new CD, after years of procrastination and life interruptions. It had been a decade since The Waiting Room and Don’t Bet The Devil Your Head. Great reviews of those two projects had raised some pretty high expectations for Rutter. His friend must have thought it was still too soon and the Rutter couldn’t pull it off.

The advice totally backfired. It became the turning point where Rutter gained the resolve to press ahead, staring down the fears and the naysayers.

His CD dedication phrase, “Go ahead and tell me what I can’t do” is Rutter staring his opponents down. He was ready to get busy.

What was supposed to be impossible has now become a triumph. At 52, Duane Rutter has more than the average number of demons chasing him, as may be the case for any career musician who has dealt with constant traveling, late nights, questionable bars and the clientele they harbour, substance addiction and depression. Add a dozen more possible excuses: Too old. Too slow. Out of touch. Too difficult. Too risky. Too many people to let down. Not good enough. Too cocky. Too much work. Too much effort. Impossible to do on your own.

Each piece of negativity sitting like a sniper waiting to take you down.

But gladly that’s not what happened. Rutter stayed connected and focused. He used his community of friends and professional activities to draw upon the invigorating sources of hope, possibility, creativity, human nature, good judgement, and excellent talent. Seizing each day, Carpe Diem and all that, Rutter has come charging through with humility and a grateful heart.

Thousands of Canadians are about to fall in love with this amazing collection of songs.

In the beautiful main tracking room at Grant Avenue Studio I’m with two dozen people who have gathered for a special listening session. Rutter calls us all together, plunks down a carton and says, “I’m going to make a big deal of opening this first one.”

He continues, “I’ve never heard anything like it out of Hamilton, or anywhere. I’m proud that it’s a Hamilton record.”

Rutter claims to be a pretty solitary guy, but for Crazy Things he has gathered a stellar group of musicians and industry professionals. Just over a year ago Rutter, whose home is in tobacco country, made Hamilton a second home of sorts. He was determined to get connected in the Hamilton area, and soon found acceptance within our vibrant, deep and caring alt country and singer-songwriter community.

As a sideman, Rutter is supremely capable on electric guitar, acoustic guitar, or bass. Tons of experience. Years of work all over the province. In Hamilton he began as a kind and humble sideman. Rutter knows what sideman work is all about. You don’t steal the spotlight. You’re there for someone else, and a degree of humility and respect is due. He accompanied Lori Yates at Sean Brush’s birthday event in October 2013. Then he played with Mary Simon at the Baltimore House. Rutter was playing with everyone. His Instagram collection shows him on stage with Lori Yates, Andrew Aldridge, George C. Douglas, Mary Simon, Michelle Titian, Frank Koren, Steve Wood, Robin Pirson, Nick Burson, J.B. Reed, Justine Fischer.

By the time he performed at our magazine release at Homegrown Hamilton in March of 2015 a shift had taken place, and now Rutter had his own group and was lining up his own shows. The Staircase Theatre concert of November 2014 had affirmed in Rutter’s mind that the time was right, and a sense of momentum and purpose was building. A particularly inspiring connection was made with J.B. Reed, singer for the Human Orchestra, and she became a regular with the Duane Rutter Band. Rutter landed a month stint at Toronto’s famous Cameron House. #TheDuaneTrain was moving. The dream became real, surely not by accident, but by another power entirely. 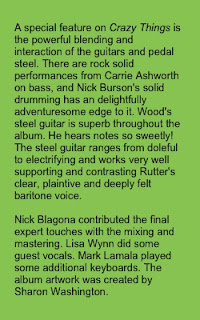 Back to the present. Rutter stands with box cutter in hand. Amid the smiling circle of friends are Bob Doidge and Amy King, operators of Grant Avenue Studio. Amy was the chief engineer. J.B. is there with a special expectant glow. She contributed vocals to “Crazy Things” and backups elsewhere. Then there’s Andrew Aldridge, who brought his world of guitar and sound expertise to the project as producer. Next is big pedal steel genius Steve “Honeyboy” Wood. Supportive Busted Flat Records rep Mark Logan is there. Affable drummer Nick Burson, always hard to miss, sports a shiny blue cowboy hat. Humble bassist Carrie Ashworth, unfortunately absent in person, is there in spirit. It’s a special moment.

“Recording this music felt like a lot of fun and was an amazing time. Over the years I’ve sent a lot of music out and got a lot of rejections. Years ago Mark Logan of Busted Flat Records took a chance on me. He’s been patient to wait for me. This record is going to stand out as a pivotal point for me,” Rutter says.

Tracking at Grant Avenue took only two days. The tunes had been road-tested and were ready. The sessions at Clubhouse Studios in Rhinebeck, N.Y. with Garth and Maud Hudson were extremely rewarding to Rutter. “Garth and Maud went through all my lyrics. They had questions about some of the negative-sounding terms. They didn’t want to contribute to any more negativity in the world. Garth played his piano part, and there was a magical moment when after everyone else had ended he kept playing and improvising. We kept the tape kept rolling and captured some pretty special moments.”

Here’s the title track. The entire Crazy Things album can be downloaded digitally for $15 from Bandcamp. 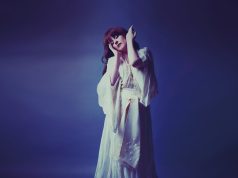