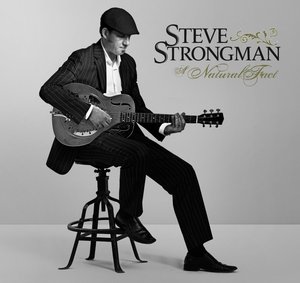 Earlier this summer I had the opportunity to meet Steve Strongman, blues guitarist and singer/songwriter. Steve has been busy touring this summer supporting the recent release of A Natural Fact, his fourth CD to date. A Natural Fact has a distinctly acoustic emphasis and, like most of Strongman’s other recordings, is a showcase of his songwriting skill in addition to his great playing and vocals.
My daughter, OJB, joined us and had a few questions of her own for Strongman. Here is her portion of the interview.
OJB: I really like this CD. I was wondering if you have just one thing that you were trying to say through all of the songs? Were they all written at the same time?

“They were written over a period of about two years. I tried some songs electric and then switched them up a little bit. I write more through personal experience. It’s however I feel. I try not to think about it too much.”

OJB: Do you ever find that stuff you wrote a long time ago has evolved when you play it now? Do you ever think like you should record this new version?

“Maybe with a certain special song I would re-record it. But most of the time I’m just moving forward and doing new material.”

GB: So now that you’ve done this acoustic CD, what do we expect next?

“I’ve still got a lot of time, after all the CD is basically brand new. I’ll let it sit and see how I feel. We’ll see how this CD does.”

GB: So, what would you want my readers to know?

“I would say, if they’re musicians who are reading it, it’s about hard work and dedication. I’m a musician. I don’t do anything else. This is what I do. I work all the time at being the best songwriter, the best performer I can be. It’s essentially my life’s work. When people see that you’re doing well, touring with Buddy Guy, opening for Joe Cocker, they say, “Wow look at this!” but I’ve be doing this since I was sixteen.”

GB: I sure hope you can pull a Juno out of this somewhere along the line.

“If it happens it happens. It doesn’t change your approach. If that happens that would be absolutely phenomenal. It’s the time in between those moments of getting recognition and winning awards that matter.”

The rest of this interview will be published on August 15 when the next issue of Greater Hamilton Musician comes out.